For an Inspired Chat about Law of Attraction, Our Little Secret and “The Pen Incident”!

Welcome Darren! Thanks very much for taking time out of your busy schedule to talk with us today. Your debut novel has certainly taken the book world by storm. Huge congratulations!

What was the inspiration behind your current book, Our Little Secret?
OK, bit of a weird story. I was on a beach in Marbs, back in 2011 and I heard a song on my friend’s iPod from the Peter Pan OST. There was a moment in the song where it built into a crescendo and when I heard it I saw a women running towards a train station edge. Trying to save a man. The seed was planted and when I came home (and after my liver forgave me) I wrote a play based on that moment called Pact. I had some actor buddies read it, and it was utter s&%t… but I really liked the characters Chris, Julia and Sarah. So I thought I’d try my hand at writing them into a short story. It ended up being about 100K (most of it utter s&%t). Then I was told by a few to try write it as a thriller. And then OLS was born.

I hope future books don’t take quite so long.

We both share a love of Law of Attraction and positive thinking. How naturally does this come to you? And how did you engineer this into the success story that IS your debut novel? I am sure other writers out there would love to hear your top tips.
This is a great question. I didn’t always think so positively. In fact, if I’m totally honest, for a lot of years I felt the world was out to get me and owed me a favour. I expected things and didn’t work hard for them. So it didn’t come naturally. I had to work really, really hard at it. I had some difficult times in 2012, and was forced to take stock. Struggling to be optimistic. Then I started a journal of the things I was grateful for and for about a week I didn’t write a single thing in it. Eventually I was grateful for the fact it was summer not winter when I had my tough times. It would have been so much harder to manage without the long sunshine filled days. It was a revelation. From there I found hundreds of things I was grateful for. But I had to really look to find them. Then my circumstances changed and I kept doing it. Now, 5 and ½ years later it comes easier. But it still takes work.

With regard to the book. My breakthrough came after a ton of rejections. I was in Waterstones, feeling sorry for myself, looking at the 1000’s of books on the shelves. Imagining mine was there also. And realized I only wanted 1 space. Just one amongst thousands. It wasn’t a big ask. I wasn’t after the entire shop. Just one space about an inch wide and 7 inches tall. When I saw that, I could visualize it happening.

With the positive thinking side of things in mind… how are you able to tap so effectively into the minds of some of your characters, people whose lives are far from rosy? This is something I had to compartmentalize in my own debut novel, which had a domestic violence thread running through it, so I am particularly curious to swap notes as often it wasn’t easy to write those scenes if I was in a good mood!
I guess coming form an acting background helps. I often play(ed) a villain on stage and then off stage, I was little old me. To help myself understand the characters though, I traveled where they did. I have been on that platform edge with my shoes off. I have been in ‘the ditch’ with the tree. I walked the streets and occasionally I tried to follow people without them knowing, just to see how it would feel.

If anyone is struggling to get into their characters’ heads, act the scenes. It’s good fun. And then after, remember, it’s just acting.

Favorite cake?
This is impossible to answer. Ummmm. Any without nuts!

Favorite travel destination?
Spent a little bit of time in the Sahara. Very much fell in love with the silence at night.

Favorite positivity guru?
Robin Sharma. Tony Robbins. Dillon Dhanecha. Gary Vaynerchuk. (As well as loads of my friends who are without even knowing).

If you could invite three authors who you haven’t yet met to a dinner party, who would they be? And what would your three courses consist of?
Even thinking about the idea of hosting a dinner party makes me nervous. Let alone choosing writers that I idolize. I think it would have to be a takeaway-of-everyone’s-choosing event… and then I’d try to be discreet whilst writing everything they said in a notepad. (This completely avoids the question, I know).

Favorite books as a child?
The Twits. Although, as a kid I wasn’t a brilliant reader. Much happier kicking a ball somewhere I shouldn’t be.

Strangest place you have ever written?
I write everywhere. Strangest might have been in a hospital bed after ‘the pen’ incident. Ironic I know.

Loveliest thing anybody has ever said about your books?
Again, tough question. I try to see the positive in all the reviews I have seen. Even if they didn’t like it, there is a lot I can learn. One of the first I received before it came out was someone saying they read a lot in the genre but really enjoyed my voice… that was a good moment.

What can we expect to see from you next?
April 5th I’m delighted to be able to say OLS comes out in print. And then on May 5th my second book, CLOSE YOUR EYES comes out in kindle format. It’s going to be a very exciting summer (I hope). I’m currently working on the plot of book three. And will have the first draft by April. Lots on but, I love this job! 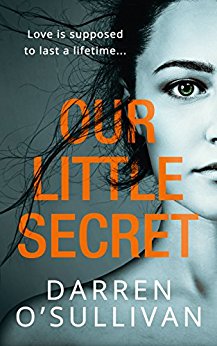 Darren is a ibooks number 1 bestselling author of ‘Our Little Secret’ and theatre practitioner. He lives in Peterborough, England where his days are either behind his laptop writing or in front of a group of actors directing.

His thriller Our Little Secret is due for paperback publication on 5th April 2018 and is currently editing his second novel ‘Close Your Eyes’ which is due for publication 5th May 2018.

A deserted train station: A man waits. A woman watches.

Chris is ready to join his wife. He’s planned this moment for nearly a year. The date. The time. The train. But he hadn’t factored in Sarah.

So when Sarah walks on to the platform and sees a man swaying at the edge she assumes he’s just had too much to drink. What she doesn’t expect is to stop a suicide.

But there are some secrets that are meant to stay buried…

One thought on “Meet The Author: Darren O’Sullivan”